Generally, a probate decree of distribution is a final ruling on all issues involved. However, if the decree is obtained by fraud, the court may impose a constructive trust. This means that the persons taking ownership hold in trust for the rightful owners.

Mrs. Norman died in Arizona on December 29, 1965. She was survived by her husband of many years, Mr. Norman.

In July of 1966, Mr. Norman consulted an attorney to prepare for probating Mrs. Norman’s estate. However, before probate started, Mr. Norman became ill and was forced to quit work for a year. He finally filed on September 12, 1969.

In March 1970, while in the process of checking some property in Oklahoma owned by Mrs. Norman, Mr. Norman learned that on November 12, 1968, Transamerica Title Insurance Company had filed a Petition for Letters of Administration of Mrs. Norman’s estate.

Those papers stated that Mrs. Norman was a single woman and died intestate. They listed 17 distant heirs living outside of Arizona, but not Mr. Norman. Notice of the hearing was published with the caption: “In the Matter of the Estate of E. J. Rose, aka Mrs. Norman.”

On December 2, 1968, Transamerica’s hearing on the Petition for Letters of Administration had been heard. Celestine Nash, Mrs. Norman’s niece, nominated Transamerica to be the administrator of the Estate of “E. J. Rose”. Notice to creditors was published. Parcel I, held in Mrs. Norman’s maiden name, was sold.

By the time Norman learned of this proceeding, the court had approved Transamerica’s final account and the property distributed. Mr. Norman moved to have the order set aside. This was denied and the Court of Appeals dismissed the appeal. The Arizona Supreme Court accepted review. 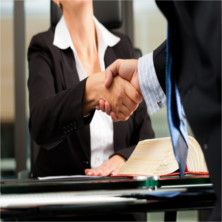 In probate proceedings, the final decree of distribution is usually conclusive. It is a bar to further proceedings concerning the same matter. However, if the decree was procured by fraud, the court can declare that the people who got property hold it in trust for the rightful owners.

A constructive trust arises by operation of law and not by agreement or intention. It used when someone acquires property through fraud, misrepresentation or concealment. Clear and convincing evidence is necessary to justify the imposition of a constructive trust.

The Arizona Supreme Court found that Mr. Norman has established a strong case for fraud. It based this on the following facts:

• Transamerica located 17 out-of-state heirs but not Mr. Norman, who lived with Mrs. Norman for 20 years;

•Mrs. Norman’s married name of “Norman” was included in the Petition for Letters of Administration.

• The original Petition, Notice, and Affidavit of Mailing were all entitled “In the Matter of the Estate of Mrs. Norman, aka E.J. Norman” but all subsequent captions were captioned in the name of “E. J. Norman” only

• The marital home where Mr. Norman and Mrs. Norman lived until her death was either Parcel I of close to it.

• If Mr. Norman had been notified, he had an absolute legal right to the property as surviving spouse.

• There is no evidence of an investigation into the name of “Norman” by the heirs or administrator.

On the basis of these facts, the Arizona Supreme Court found that Mr. Norman established fraud by clear and convincing evidence. However, it ordered this matter returned to the trial court to allow Transamerica to present any defenses.

The Court said that if the facts are established, on remand, to be as they appear in this decision, Mr. Norman is entitled to the relief requested.

The Arizona Supreme Court reversed the judgment below and remanded for a trial de novo.